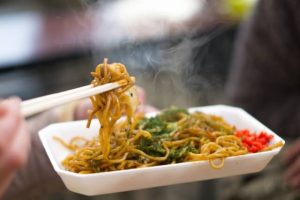 Last year, my daughter’s Japanese teacher at the local high school asked me to teach about 40 kids how to make yakisoba. So one early morning, we crammed into the very small ‘parent’s’ kitchen, set up a number of different stations with electric frying pans, and cooked away. There wasn’t a leftover in sight, and it was a lot of fun. Not only is this a deliciously seductive recipe, but it is very easy to make and a great way to get kids to eat a lot of vegetables painlessly!

Like any country, Japan has its traditional snack foods. Some of the tastiest can be sampled in the mobile food stalls known as yatai, found at public events, traditional theater, festivals, and fairs – especially at evening cherry blossom-viewing parties in April – and on many a street corner at night.

The origins of yatai with prop-up roofs and plastic sheeting “walls” against the worst of the weather can be traced back to the early 1700s. A more primitive version, called a suburi yatai, which sold not only foodstuffs but also basic goods and fuel, dates from 1613, in the early Edo period (1603-1867). After a major earthquake in Edo (Tokyo) in 1700, these stalls started to sell dengaku (grilled tofu topped with sweetened miso), a cheap dish popular with traveling samurai as well as locals. Particularly in the aftermath of natural disasters and during other times of famine, yatai came into their own; the government regularly attempted to ban them, claiming that they caused too many fires or disturbed the peace, but by the eighteenth century they were all the rage, reaching a heyday in the 1780s. While early yatai had sold only dried, grilled, or boiled fish, vegetables, and a variety of desserts, by the 1780s they were offering everything from candy to tenpura.

One of the most popular types of yatai food since the 1700s has been late-night soba (buckwheat noodle) snacks, known in those days as yotaka soba. A yotaka is a nighthawk, but it can also refer to a prostitute, and ladies of the night often ate soba at yatai after a hard evening’s work. The food being cheap but delicious, it was not uncommon for yotaka women to meet some of their customers also enjoying a restorative bowl of noodles before strolling home. Even now, office workers and students studying late into the night drop in at a yatai for midnight feasts of ramen (Chinese noodles).

Yakisoba (Japanese-style chow mein) is another typical yatai recipe. Although Chinese noodles are used, the dish is entirely Japanese in origin, and has been sold at yatai in Tokyo since the late 1930s. It is thought to have developed as a variation on okonomiyaki, a pancake topped with vegetables and meat or fish and slathered with a sweet, thick sauce, which has been served at yatai since the Edo period. (See my Okonomiyaki recipe: www.thanksforthemeal.net/okonomiyaki)

Addictive and filling, like many other yatai foods, yakisoba is very easy to make at home. For an informal party, use a large electric frying pan and cook at the dining table.

This post may include affiliate links, so without costing you anything extra, I’ll earn a small percentage of the sales if you purchase these items through these links. Thank you for your support! 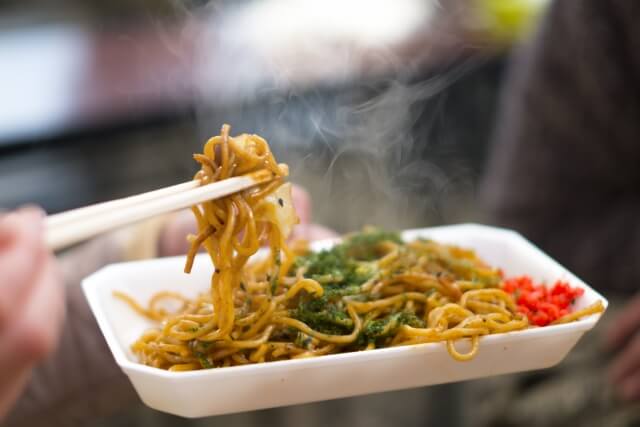