Like many cultures, Japan first used chickens as living alarm clocks. The first record of this dates back to the Kojiki, the country’s first official history book, written in 712. The chicken was considered a sacred bird back then because it told people when morning had come, and apparently no one considered consuming the source of their wake-up calls!

Where did Japan’s first chicken come from? We know that during the Heian era (794 – 1190) Chinese chickens were used in Japan for fortune telling (reportedly by guessing the cock’s song) in addition to announcing the dawn. From the end of the Muromachi era (1338 – 1573) to the early Edo era (1603 – 1867), trading among other Asian countries involved using chickens as currency; they were also sold as pets and matched in cockfights. But eating them (and such animals as horses, monkeys, cows, and boars) was prohibited by Buddhist strictures.

The taboo of eating chicken

This taboo was lifted by the 1600s, due largely to a lack of food and occasional periods of true famine. Chickens were also being raised on a small scale domestically. As to which was consumed first, the chicken or the egg, in Japan’s case it was undeniably the egg.

Cookbooks from the Edo era show a variety of egg dishes, but no chicken dishes. In 1643, however, the book Ryori monogatari (The Story of Cooking) contained a small section of preparing chicken, but it wasn’t until the end of the Edo era that chicken became a common comestible. In those days, chicken cuisine probably meant Nanban ryori (Western cuisine that originated in Nagasaki) and Shippoku ryori (derived from Chinese cuisine). Both used chicken in their dishes, although it still wasn’t popular among the common people.

One area renowned for chicken production, breeding, and cuisine is central Japan, specifically Aichi and Gifu prefectures. In Aichi, the Owari samurai of Nagoya castle raised chickens as a side business to selling the eggs, they also sold the chickens as pets.

One of the clans was the Kaifu family, who eventually produced Toshiki Kaifu, one of Japan’s prime ministers. During the early Meiji era (1868 – 1912), the Kaifus created a new chicken by cross breeding a Chinese chicken and a regional chicken called Nagoya cochin that had better – tasting meat and could produce more eggs.

The origins of this dish, tori no hikizuri, are a bit mysterious. It was first mentioned in 1806 in a book entitled Ukare suzume yugi jima (which translates as “Merry Sparrows Dancing Island”) by Junrei Gohosha. Hikizuri comes from the word “hikizuru,” a verb meaning “to pull or drag,” and was applied because people “pulled” the ingredients from inside the pot. Although many people think this dish is an imitation of sukiyaki, the latter actually mimicked tori no hikizuri.

This is total and yummy comfort food cooked at the dining table! I love to serve this to family and friends. Everyone gets a kick out of it being cooked in front of them and serving themselves! It is also easy, something we can all appreciate, especially now. 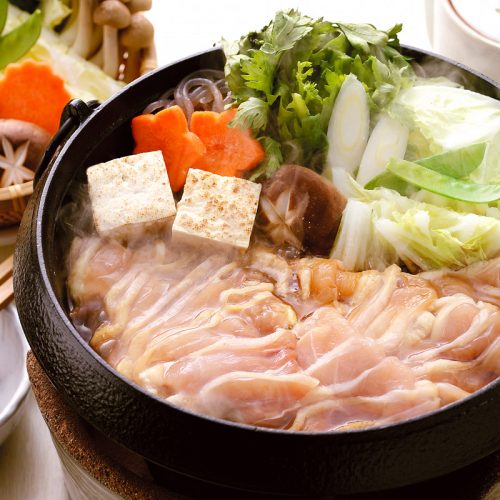 Tori no Hikizuri: A Chicken-based Precursor of Sukiyaki

Optional ingredients to add if you want: 1. Shiitake mushrooms, stemmed and cut in half 2. One or two bunches of mitsuba (trefoil), cut off ends, and cut into 2-inch pieces
Keyword chicken
Tried this recipe?Let us know how it was!