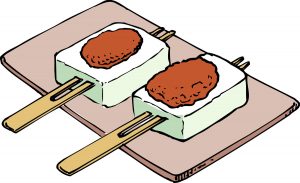 A move to Aichi Prefecture when I lived in Japan prompted a visit to Kikuso, one of the area’s most famous regional-food restaurants. Kikuso’s specialty is dengaku nameshi, a savory combination that has been served since the place opened sometime around 1820. Dengaku is a seductively simple, even primitive, dish, made of small squares of pressed tofu that have been grilled, topped with pungent miso, lightly grilled again, and then garnished with everything from spicy Japanese mustard to poppy seeds. Nameshi is vegetable rice; Kikuso’s is made with chopped, spicy daikon radish leaves, the perfect counterpoint to the dengaku. I have never forgotten Kikuso, nor its incomparable dengaku nameshi.

Dengaku has been around for centuries. It was already being mentioned in shrine diaries in the mid-fourteenth century, and by the Muromachi period (1392-1573) was a well-known dish throughout Japan. Dengaku takes its name from dengaku hoshi (Buddhist priests), who would dress up in colorful costumes and cavort and dance on single stilts during public entertainments and festivals to pray for a good harvest. Two-pronged skewers are traditionally used for grilling dengaku, and these are said to represent the stilts.

By the late seventeenth century, a variation of dengaku appeared that used a root, konnyaku (devil’s tongue), instead of tofu. By the eighteenth century, dengaku was being served throughout the nation at way stations for weary travellers, at tea shops in pleasure quarters, and at post stations. Although dengaku is not an expensive dish, it was considered a delicacy in the Edo period (1603-1867), and was often served with vegetable rice as is done at Kikuso.

By the Meiji era (1868-1912), however, the original version of dengaku had declined somewhat in popularity, and with each subsequent era contemporary variations of the dish were devised. Fish, eggplant, chicken, and sato-imo (field yams) are just a few of the ingredients that replaced tofu in dengaku. Although dengaku is usually eaten by itself as a snack or served as an hors d’oeuvre, the addition of soup, rice, and pickles can make it the main course in a filling lunch or dinner. 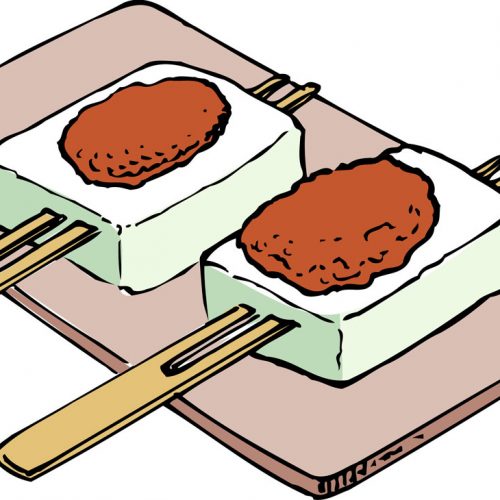