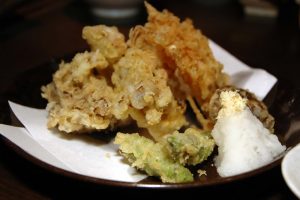 With a light, crispy, oil-free coating enveloping a perfectly cooked and succulent piece of seafood or vegetable, tenpura (also written tempura) is considered a quintessentially Japanese food. Both the word and the dish, however, are almost certainly of foreign origin. The source: Spanish and Portuguese missionaries called nanbanjin (southern barbarians) who came to Japan to convert the heathen masses toward the close of the sixteenth century. Prohibited from consuming meat on Fridays, they substituted batter-fried fish.

There are several theories on where the name came from. Templo, meaning temple or church in Spanish, and tempero, which in Portuguese means cooking, are two possible roots. The Chinese characters can also be read as follows: ten meaning up, pu for flour, and ra for thin silk, the latter most likely a reference to the thin coating of batter.

By the middle of the Edo era (1603-1867), tenpura, inexpensive and considered relatively low-class, was a popular offering at open-air food stalls. Only in recent years has the dish risen in both price and public esteem to its exalted culinary status in high-class establishments. With a little preparation and practice, it is surprisingly easy to make equally good tenpura at home. Keep the oil at a constant temperature; use ice-cold water to make the batter; and, perhaps most important of all, leave the batter lumpy. 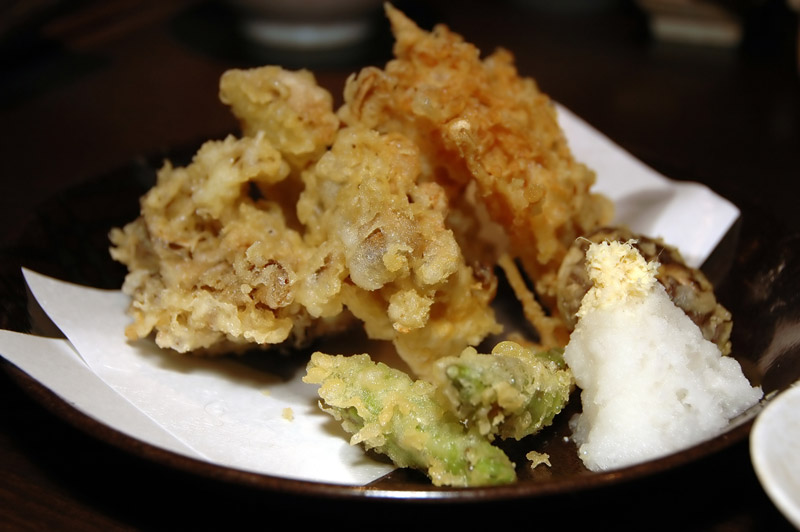