This recipe is a favorite in beer gardens and beer halls in Nagoya, where I happily lived for a number of years.

Beer halls and beer gardens are popular summer retreats in japan. Just like overseas drinkers, the Japanese enjoy a variety of highly addictive and tasty snacks that inevitably inspired thirst for another draught. One typical favorite is tebasaki – flavored fried chicken wings.

But first, a bit about beer. As far as we know, beer was introduced to Japan during the mid-Edo era (1603-1867) by Dutch merchants. The Dutch were allowed to land at Dejima island near Nagasaki during the long period of Japan’s national isolation, and among their wares was lager beer. The first Japanese to actually make beer for personal consumption was Dr. Komin Kawamoto, who acted as an interpreter for the Tokugawa military government in 1853 and was served beer while on Commodore Perry’s ship. Dr. Kawamoto became so enthusiastic about this new beverage that he obtained the recipe from Commodore Perry himself and then went home and started brewing. The first non-Japanese brewery was started in 1870 by an American named William Copeland, who built the Spring Valley Brewery in Yokohama to satisfy the thirsts of an increasing number of foreigners who converged on Japan after it opened its doors to the rest of world. We also have Copeland to thank for the first beer hall in Japan, situated right next to his brewery. Although these beers were not produced on a large scale, they were popular enough to be called maho mizu (magic water) by the Japanese.

In 1872, the first Japanese brewery opened in Osaka and began producing Shibuya beer. In March 1875, the first advertisement about beer appeared in Tokyo Nichi Shimbun (now the Mainichi Shimbun). It was a simple newspaper ad, but since beer was somewhat unknown, it caused a big commotion. Kiyobe Nakagawa, often called the father of beer, started what would later become Sapporo Beer in Sapporo the following year. By the mid-Meiji era (1868-1912) there more than 100 breweries scattered around Japan, including Kirin, which also had its origin in Yokohama.

Beer gardens first opened in 1896. Asahi Beer, based in Osaka, put up a tent and served a draft brew called Sakura Beer. In 1899, Ebisu Beer Hall was opened in Tokyo by Nihon Beer Corporation. Beer was sold by the glass with Western snacks such as sandwiches. After this, many popular beer halls opened in the city. Shimbashi Beer Hall, for example, catered to people waiting for trains and to foreigners. It was a large, typically noisy place. On opening day, it sold 225 liters of beer-due in no small part to the American navy men who had heard of it.

For the sake of recipe testing, I won’t mention how many chicken wings and mini-drumsticks were consumed, along with various bottles of Japanese beer……..in pursuit of the perfect recipe! 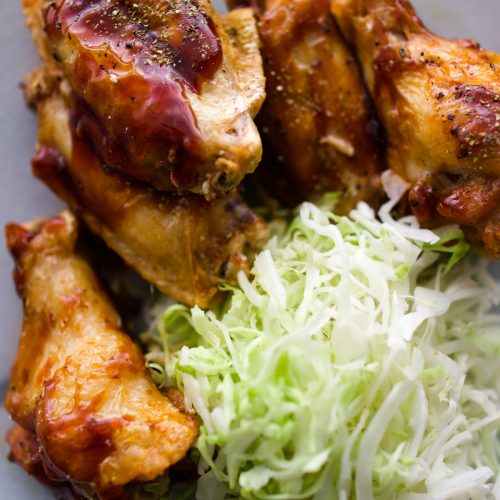 There are endless seasoning variations to try and taste, and that's part of the fun. Everyone has their own favorite. Remember to balance out a sweet base with a spicy topping as my recipe does. Here are some other flavor ideas to try: Make your own favorite soy-based marinade for the chicken: Some ingredients to add in could be minced garlic, wasabi, mustard, curry powder, sesame oil, paprika, white sesame seeds, vinegar, and so on. Sprinkle cooked chicken with white sesame seeds,  shichimi togarashi (7 taste pepper including red pepper), or coarsely cracked black pepper.
Tried this recipe?Let us know how it was!

If you like this, check out other regional Japanese recipes >>

Do you have Lucy’s cookbook yet?

Leave a note in the comments section and let me know if you made this recipe and how it turned out!