Keeping with our theme of quick, versatile, and easy to eat and make rice dishes (like Zosui), here is another traditional favorite of mine, chazuke.  I like to make it when I am in a hurry to get dinner on the table and also when I have left-over rice.

What is Tai Chazuke?

Simply put, chazuke is either hot or cold cooked rice, topped with a variety of ingredients and then immersed in either hot strong green tea or dashi stock. We have samurai warriors and Buddhist priests to thank for chazuke, a venerable Japanese fast food that remains popular to this day.

This particular recipe uses tai (sea bream) and dashi stock, but of course, there are endless variations. If we use green tea instead of stock, then it would be called Taicha, which is quite popular at the moment. Cha meaning tea and zuke meaning to submerge. Most likely this dish originated in Kyushu, which is famous for its sea bream.

Chazuke remains a popular craze, with a variety of instant, dried and inexpensive toppings (furikake), such as the well-known Nagatanien brand used. There are even gift sets of more sophisticated and pricier chazuke flavors available.

The practice of mixing rice with a liquid began in earnest back in the Heian era (794-1185), when aristocrats poured hot water over cold rice in the winter and cold water over the rice in the summertime. This was thought to disguise the taste of rice that was occasionally poor in quality.

Fast Food From The Past

By the Muromachi era (1333-1568), the standard breakfast for samurai was rice, miso soup, and pickles. During the civil wars that raged in the latter half of this era, samurai were asked to be frugal as an example to the populace, so they often poured their soup over their rice to create a single dish. This was known as nekomeshi, or “cat’s meal,” because pouring soup on rice for cats is to soften the rice to make it easier for them to eat. Since it was filling and quick to make, this dish became a samurai staple.

The forerunner of modern Ochazuke

Hoban or hohan, the forerunner of modern chazuke, was also being eaten by Buddhist priests during the same period, and soon found its way onto the menus of high society. It was served to guests during the tea ceremony, which also developed during this time. The principle was the same: cooked or flavored ingredients (such as vegetables already cooked) were placed on top of rice, and then covered with either green tea or weak dashi stock. It was beautiful to look at and easy to prepare – a perfect offering for unexpected guests.

By the middle of the Edo era (1603-1867), a greater variety of colorful, flavorful toppings were in use, spurred on by the influence of kaiseki (Japanese haute cuisine) and newly sophisticated tastes. It didn’t matter if the rice was hot or cold, but the tea or stock had to be really hot, since it helped cook any raw toppings such as fish.

Regional versions of chazuke can also be sampled around Japan. On Shikoku Island, the local version is called bokkake. Bokkake’s main ingredient varies from place to place – rabbit and mackerel are two that come to mind. The main ingredient is cooked together with lots of different vegetables, almost like a stew, and then everything is laid over hot rice. In Okinawa, a number of chazuke variations with a Chinese influence are made. The only difference is that the stock is made from both pork and fish. 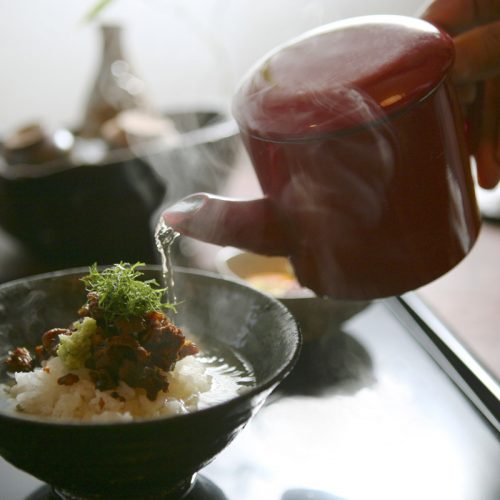 Dashi Stock (or use homemade)

Some other common toppings include Japanese pickles, umeboshi, sesame seeds, salted salmon, trefoil, scallions and wasabi. If you decide to use good quality strongly brewed green tea instead of dashi stock, top with a generous dab of wasabi to taste after pouring the piping hot green tea over the rice/fish combo and eat immediately.
Tried this recipe?Let us know how it was!

Do you love Tai Chazuke?

Snap a pic and hashtag it #thanksforthemeal — I would love to see a photo of your Chazuke on Instagram and or Facebook, or leave a note in the comments section (see below) and let me know!