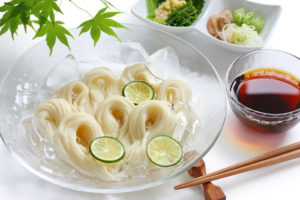 THERE IS NOTHING MORE RESTORATIVE in summer than a slurp of cold somen, Japan’s thinnest noodle, made from wheat. As a hot dish, somen is known as nyumen; cold, it’s called hiya-somen or hiya-mugi, and is traditionally eaten from early July to mid-August.

The word “somen” is derived from the Chinese sakumen, meaning “cable noodles” – most forms of noodles came to Japan from China. Somen are traditionally made the Chinese way, by pulling the dough rather than cutting it.

Little is known of the origins of somen in Japan. In the Nara era (710-93), wheat was already being grown in Miwa, Nara Prefecture; the people of Miwa made a dough of wheat flour and salt water similar to somen dough, but we don’t know whether somen was made.

The first written mention of somen appears in Engikishi, a tenth-century record of royal ceremonies. By 1205, it was being eaten in Kyoto by monks who had travelled in China. It didn’t become widely popular, however, until the Edo period (1603-1867), as wheat was initially reserved for nobles and priests.

Somen is best made in winter, dried slowly, and eaten after the June-July rainy season. Unlike rice, it improves with age and can be kept for a year or so in a dry, cool place. These days, most somen is machine-made, but Miwa hand-made somen is still available, and said to be the tastiest in Japan. 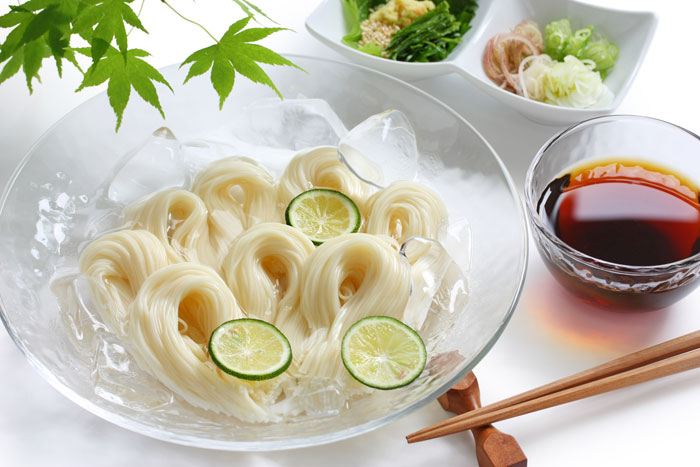 SOMEN TIME: When the Slurpin’ Is Easy