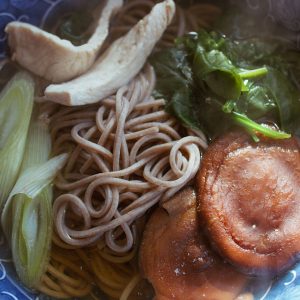 IN JAPANESE CULTURE, soba (buckwheat) noodles have always been seen as a “happiness” food, served on special occasions. It is traditional, too, when moving into a new house to greet your neighbors with hikoshi soba (moving soba). This involves a play on words, as soba also means “close” or “near” – like neighbors.

Another soba custom is toshikoshi soba (year’s-passing soba), supposed to be the last food to touch your lips on New Year’s Eve. The tradition is so established nationwide that often reservations are needed even for buying the freshly made soba to cook up at home. One year I attempted to make my own: working with fresh buckwheat flour proved extremely hard, but my toshikoshi noodles won nods of approval from the family even though, without the special chef’s knife used by soba cutters, they were a trifle thick.

According to a diary written by a samurai named Watanabe Hyotaro between 1839 and 1848, it was common in those days to go out and eat soba on the last day of the year. An even older story, from the Kamakura period (1185-1333), relates how in Hakata, Kyushu, a businessman from China named Shakokumei used to distribute buckwheat flour to poor people on the last day of the year, telling them how it was to erase the year of poverty and welcome in a good new year.

Perhaps the most persuasive explanation for the tradition, however, is that in the Edo era (1603-1867) merchants used to clean factory floors with soba dumplings to pick up any gold filaments. So it became a superstition that soba “collected gold”. Eventually factory workmen started to make toshikoshi noodles, and ordinary people copied them – all in the hope of having a prosperous new year.

New Year’s is one of the best times in Japan, at least for eating and relaxing. Get Lucy’s Osechi cookbook, full of recipes that are fast to make, easy, and quite delicious for your New Year celebrations (along with the history and traditions and little tidbits Lucy always includes). Get the book!

Makes a great gift too! Did you know on the Amazon page there’s an option to give it as a gift? 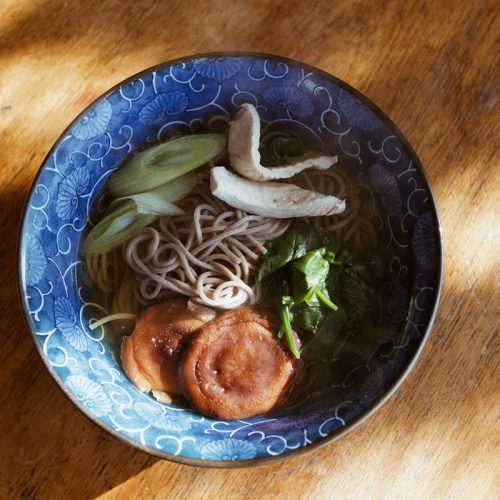