I get a lot of potatoes in my bi-monthly CSA box, so I have been making Small Potatoes in Sweet Sauce with fresh Ginger recipe quite a bit. It makes for a great and easy side dish.

And since I freely admit to being a history nerd, I also love collecting old books about cooking in Japan, both in Japanese and in English. They range from a volume in Japanese dating back to the late Meiji period (1868-1912) to a curious tome written in 1948, during the U.S. Occupation (1945-52). Its rather overblown title is The American Way of Housekeeping of the Women of the Occupation by the Women of the Occupation for the Women of the Occupation. No single writer is acknowledged, only groups such as the American Women’s Guild, Cavalry Officers’ Wives, and Navy Officers’ Wives. Another similar book, recently reprinted, is called simply American Recipes. First published in 1939 by the Yokohama chapter of the Daughters of America, it was meant to assist Japanese cooks in preparing both Western and Japanese dishes to suit the tastes of the foreigners living in Yokohama.

Looking at these two books (both of which, incidentally, are bilingual), particularly The American Way, it is apparent that the Occupation forces really brought home cooking and housekeeping methods with them when they came to Japan. It is also apparent that ready access to U.S. base commissaries allowed them to maintain a standard of dining quite lavish for those times. Recipes in The American Way, for example, include baked ham with champagne, beef stroganoff, and a fine three-layer cake. The book’s opening chapters provide descriptions of a typical breakfast, lunch, and dinner in 1948, as well as instructions for the housekeeper and cook on how to set the breakfast tray, clean the house, do the laundry, store food, and polish silver!

For the vast majority of Japan’s inhabitants, however, the period during which these books were published was a time of acute food shortages. Rice was strictly regulated by the government via consumption allowances and price controls. Diners had to have a rice coupon to order rice at a restaurant, a practice that was continued for a time even after the war ended.

By the close of World War II, in fact, there was virtually no rice to be had in the country. Vegetables were being grown outside the Diet (Parliament) building in Tokyo, and many Tokyoites were forced to scour the countryside for food on a regular basis. Sweet potatoes, pumpkins, and potatoes were some of the more accessible starch substitutes for the rice that serves as the mainstay of the Japanese diet. Several recipes, including the one below, adapted from a 1938 book called Nichi-nichi katsuyo ryori jiten (Encyclopedia of Practical Everyday Cooking), put out by the NHK television network, took advantage of that relative abundance.

If you make this recipe and love it, please come back and give it a 5-star rating ⭐⭐⭐⭐⭐ It helps others find the recipe! ❤️ Above all, I love to hear from you. Then snap a photo and tag me on Instagram! I would love to see your creation. 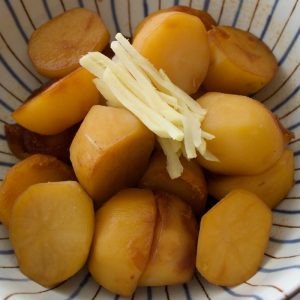 Try making the same recipe with sweet potatoes if that is all you have on hand or prefer to white potatoes.
Keyword potatoes
Tried this recipe?Let us know how it was!