My niece, Corina Seligman, knows her sake! So I asked her to do a guest blog on some of its finer points. –Lucy 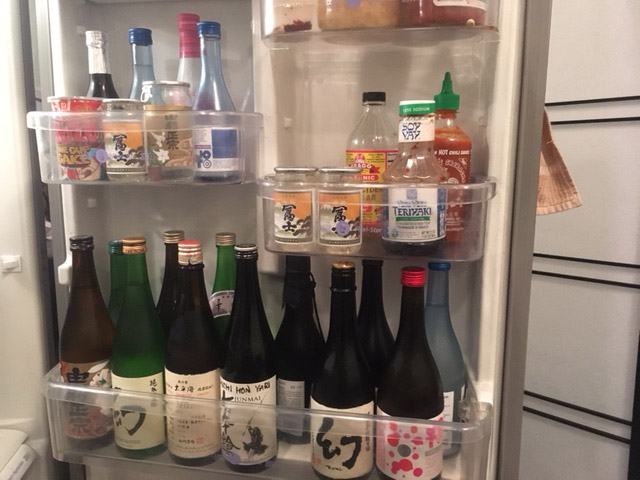 I sell sake for a living. After 15 years of bartending and a few years in management I have recently transitioned to the other side of the industry: sales.

I work for Empire Merchants, the oldest and largest liquor distributor in New York. There are over 1,400 employees and 13 divisions. I work in the vintage wines division, the smallest in the company. My position was created just this year and I am their first and only sake specialist.

While I am still very new and most of my peers and many of my buyers don’t know much about sake, the world is wide open for me. One of my biggest goals is to demystify sake for Western drinkers. Sake is not meant to only be drunk with sushi. I can never say that enough!

For those who find the idea of drinking sake with anything other than a spicy tuna roll or a hot bowl of ramen, here’s what I have to say to them:

Think of sake the way you would think of wine or beer- the food pairings have little to do with the country of origin and everything to do with flavor profile and balance. Does your mouth salivate at the thought of pizza (Italian) and beer (very likely German, American, Belgian, etc.)? How about pairing Thai or Indian food with an off-dry Riesling (probably German, American or French)? How delicious does a dry French rose paired with some sweet and savory all American BBQ sound? You get the point.

So why do people think sake is any different when it comes to food pairing? Sake is arguably one of the most versatile beverages on the planet. Many can be served at various temperatures, some are undiluted, sparkling, unfiltered, infused and even aged! Sake is perfect for food pairing. If there’s a dish, there’s a sake for it.

Without diving too far down the rabbit hole, I’d like to suggest a few not-so-obvious food and sake pairings. Feel free to use any sake of a similar style and experiment on your own! You can thank me later 😉

This sake is from the Tajima Brewery and is traditional in every sense of the word. The small brewery only makes Yamahai sakes where they allow the rice to sit in the open air so it can absorb all the air-born micro-organisms as it ferments. This particular Yamahai has a more mellow attack than most, but you can still taste the umami flavors in its fragrant and rich mouthful. I’ve heard rumors that they sell dark chocolate at the brewery which is what gave me the idea to pair it with a dense, complex, chocolatey mole sauce layered over chicken, beef or chunky vegetables. A delicious pairing and perfect for the coming winter months!

I’m currently obsessed with this sake. It is very well balanced with just the right amount of nutty earthiness with a bright juicy effervescence on the tongue. Pretty much everything I love in a sake all poured into one beautiful bottle. The complexity in this sake lends itself to being paired with many flavors and textures. My ideal afternoon spread would be for the sake to play off of the delicate creaminess of cheese, tart and sweetness of fruit, and the salty richness of meat. Let’s break it down a little more by finding flavors in this platter to compliment the three pronounced aspects in this sake-nuttiness, juiciness and slight umami.

Here are some more specific suggestions:

Mild creamy cheeses with a hint of nuttiness:

Crisp apples and pears, white peaches, nectarines, honeydew melon and lighter fleshed melons (I wouldn’t do cantaloupe or watermelon as their flavors may be more pronounced for this but feel free to experiment!)

Prosciutto and dry cured salami. Plump green olives can also be a nice vegetarian option in this category!

I first discovered this sake when I was working as the bar manager at a high end Japanese restaurant in California. Hanahato was pretty polarizing for the staff when we first tried it due to its pronounced nose being very heavy on the umami notes. Some even said it smelled like fish sauce or soy sauce! But if you can get past the unexpected smell, this sake, served at room temperature, has a similar taste profile to a sherry or port with a dense honey/nutty aroma.

Kijoshu is a rich and luxurious sake that is created by replacing some of the water used during the fermentation period with finished sake. In other words it’s a sake fortified with sake! Hanahato has been aged for eight years and has notes of dried fruit and earthy mushrooms. Anything that can be classically paired with either a ruby or tawny port would be a delightful pairing with this sake.

My restaurant had a decadent dark chocolate fondue dessert and I loved blowing people’s minds by pouring them a small taste of the Hanahato to accompany it. Other great pairing options would be a dark chocolate mousse, a nutty pecan pie, gooey bread pudding or even a classic hot fudge sundae. Yummmmm!

These are just a few ideas I have for thinking outside the (bento!) box and having some fun with sake and cuisines from all over the world. I’m looking forward to sharing more of my sake food pairing adventures in the months to come. For now I’m going to pour myself a nightcap of Daiginjo in a big elegant Bordeaux glass because sometimes sake is also pretty damn great on its own.

Leave a note in the comments section (see below) with your favorite sake and food pairing!