I was lucky enough to visit Okinawa once and loved it! Here is one of my favorite recipes from there.

Modern Okinawa cuisine is based on dishes enjoyed by the rulers of the Ryukyu dynasty, which controlled Okinawa from 1372 to 1879, and traditional island homecooking.

Originally, royal Ryukyuan cuisine was served only during special events and ceremonial occasions. It was gorgeous fare, richly laid out in the style of a Chinese banquet, and dramatically presented on exotic black and red lacquerware. When the dynasty eventually collapsed, and Okinawa became a prefecture of Japan, most of this sumptuous formal cuisine disappeared with it. But some dishes were adapted to fit the budgets and tastes of ordinary folk. The passage of time has made it difficult to find the culinary seam between royal and traditional cooking.

Okinawa’s proximity to China and the Ryukyu’s dynasty’s close ties with the Middle Kingdom are reflected in Okinawa’s overwhelming preference for pork – it’s estimated that there are over 150 pork dishes in Ryukyuan cooking. Other similarities include an abundance of dishes stir-fried in the Chinese fashion, the often heavy-handed use of oil and salt, and the pungent presence of plenty of garlic. Because of its hot, humid climate, many of Okinawa’s dishes are also preserved, using such techniques as slow boiling and braising in sweetened soy sauce. One of these is rafutei, which is also one of Okinawa’s most popular pork dishes. Rafutei’s origins are uncertain, but written records give the original name for the dish as rafutai-ni, so it is likely that it came from China.

Rafutei can be cooked in either a soy or miso-based sauce. My recipe is soy-based. The important thing is that the meat is boiled for a long time, the aim of which is to create a meltingly tender mixture of meat and fat, but without the fattiness. In Nagasaki, they make a similar pork dish called kaku-ni. Kaku-ni is also braised in sweetened soy sauce, but it is cooked for an even longer period than rafutei, resulting in even greater tenderness.

If you like this, check out the other regional Japanese recipes >>> 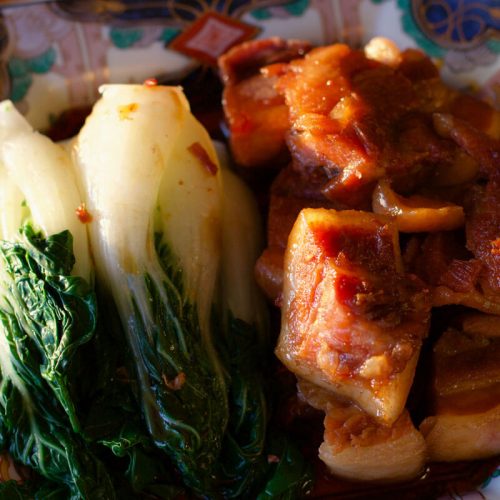 Do you have Lucy’s cookbook yet?

Leave a note in the comments section and let me know if you made this recipe and how it turned out!