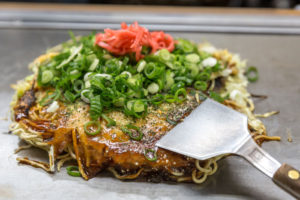 The Japanese savory pancakes known as okonomiyaki are fun, inexpensive, and make a ﬁlling meal for all  seasons. Okonomi means “as you like it,” and being able to mix just about any meat  or vegetable you want into a batch of  them is a great incentive to clear out your refrigerator. Another of okonomiyaki’s charms is that you can make them right  at the dining room table on an electric  griddle.

Okonomiyaki ﬁrst became popular in Osaka after the Meiji period (1868-1912) and eventually spread throughout Japan.  Osakans also call them yoshokuyaki  (Western-style pancakes) since they use ﬂour, an import. Whatever they’re called, okonomiyaki are still an enormous favorite in that city: there are close to 50,000  okonomiyaki restaurants in Osaka alone.

After the Meiji period, small candy shops in downtown Tokyo used to have  a heated iron plate in front of their shops where children could make their own  okonomiyaki (or monjayaki as they’re called in Tokyo).

Up until the early thirties, soy sauce was used as the primary sauce for okonomiyaki. After that, a thick sauce similar to that used on tonkatsu (pork cutlets) became popular. Depending on the  region, this sauce can be on the sweetish side (Hiroshima) or have a slightly spicy kick (Osaka).  Hiroshima is also a renowned okonomiyaki center. I tasted them for the ﬁrst time there in a small back-alley restaurant during my college days. The generous volume of the Hiroshima pancake exceeds even that of the Osaka variety. 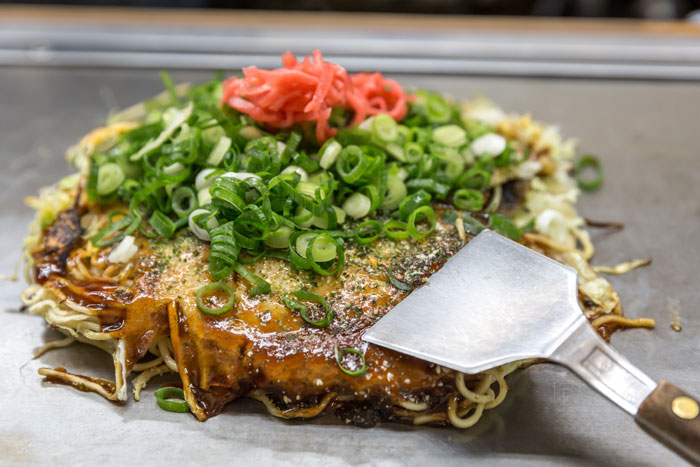