Though many of them would deny it, the Japanese are notorious sweet-eaters who indulge in a multitude of cakes, most often during teatime. This penchant for snacking dates back to the early Edo period (1603-1867), when eating two large meals a day was the norm – repasts punctuated by endless sweets and cups of green tea.

There are two distinct categories of sweets in Japan: wagashi, traditional handmade Japanese confections that are usually steamed or uncooked, and yogashi, or Western-style confections.

Wagashi have historically deep-rooted celebratory and often seasonal connotations, typified by the use of bird and flower names as well as other natural themes, such as uguisumochi (nightingale mochi [pounded rice] cake), sakuramochi (cherry mochi cake), noshiume (pressed plum cake); and rakugan (“falling geese” cake). The poetic nature of these appellations appealed greatly to monks, samurai, high-class merchants, and others of the intelligentsia.  And I will admit, I love Japanese treats (especially wagashi), which I can definitely trace back to my many years of studying the Tea Ceremony when I lived in Japan.

Ohagi in the Autumn and Botamochi in the Spring

One of the most popular types of wagashi, called ohagi in the autumn, also referred to as botamochi in the spring (bush clover mochi), depending on season and region, can be traced to the Heian era (794-1185). 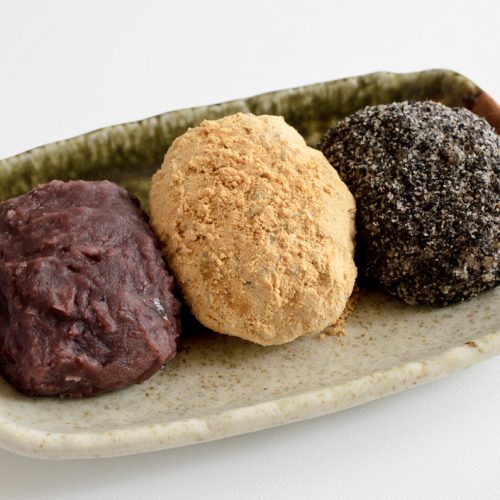 *If you prefer to use ready-made chunky and or smooth red bean paste called anko, that works too!
Tried this recipe?Let us know how it was!

Did You Make This Recipe?

If you make this recipe, snap a pic and hashtag it #thanksforthemeal — I would love to see your creations on Instagram and or Facebook, or leave a note in the comments section (see below) if you make this dish!