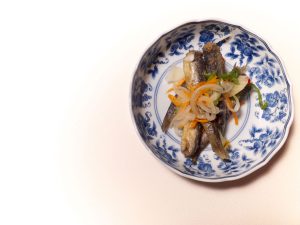 Portuguese and Spanish missionaries started trickling into Japan to spread the teachings of Christianity near the end of the Muromachi era (1392-1567), and their first foothold in Japan was Nagasaki. The Japanese took to referring to all Europeans as Nanbanjin or “Southern barbarians,” and gradually the term “nanban” came to mean anything related to European civilization; even the ship that brought the missionaries to the shores of Japan was referred to as nanbansen.

In addition to importing a different religion and culture, the priests also sparked a culinary revolution of sorts. Nanban ryori (“Southern barbarian cuisine”) was a style of cooking characterized by deep-frying and the use of dried hot red peppers and onions, both of which the newcomers employed liberally in their cuisine. However, since the onion didn’t come to Japan until the seventeenth century and wasn’t popular until the Meiji era (1868-1912), Western cooks took to using Japanese leeks instead. The Japanese liked what they tasted and began creating dishes that used these two ingredients.

One example is kamo nanban – soba with wild duck and leeks. By the Edo era (1603-1867) many cookbooks referred to any dish using leeks as nanban-style cooking. The preferred method of cooking in this Nagasaki regional cuisine was deep-frying. The frying of food, including tempura, can be traced back to the meatless Fridays the devoutly Catholic Europeans observed for religious reasons.

Nanbanzuke (aka Nanban-zuke) is one facet of Nagasaki’s regional cooking style, and among its most enduring variations is Aji no Nanbanzuke. To make this dish, small horse mackerel are deep-fried and then marinated in a vinegar-based sauce that includes red peppers and leeks. Summer is considered the best season for horse mackerel, which is often served as sashimi, salt-grilled, boiled, or deep-fried. Many people think the latter is the best of all.

During a recent trip back to Japan this summer, I not only enjoyed Aji no Nanbanzuke, but I helped cook a home-style version of this style of cooking using chicken and assorted vegetables. (I will post that recipe in the future.) What I like is that this is a pretty forgiving dish; an easy and delectable way to eat a lot of vegetables during hot and humid summer days, not to mention succulent fish and or chicken, and surprisingly light despite it being a fried dish! 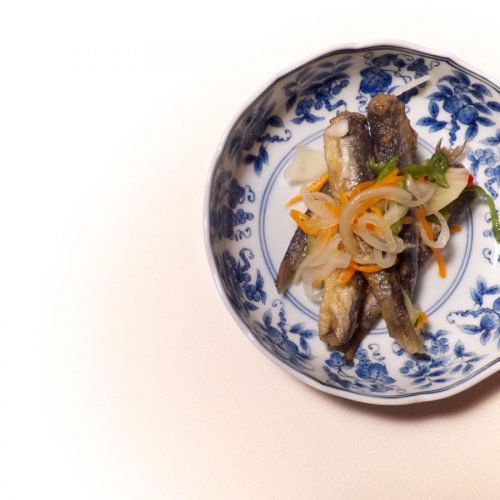