What the Japanese originally called kashi first came to Japan from China during the Nara period (710-93) in the form of fresh or dried fruit. Although not our modern idea of what a sweet should be, fruit was still referred to as kashi right up until the Muromachi period (1333-1573). Later, sweets made of rice flour or wheat flour and steamed or fried in oil—the forerunners of modern-day Japanese confections—were eaten as a snack between the two daily meals most Japanese nobles consumed in ancient times.

The main sweetener employed in these confections was a syrup extracted from amazura, a tree-like vine. Although a primitive form of unrefined sugar appeared in Japan during the Nara period, it was almost exclusively employed as a cure-all by the aristocracy during the Nara and Heian (794-1185) periods; sugar didn’t come into general use as a sweetener in Japanese confections until the Muromachi period.

Traditionally Japanese confections are called wagashi. There are three main types; namagashi (raw confections), nerigashi (semi-raw confections), and higashi (dried confections). Most of these sweets were developed as a complement to the tea ceremony. Seasonally based, the two common denominators in many of these treats are a lot of sugar, which is used as a preservative, and the use of a red bean paste, called an, traditionally made from adzuki beans.

One of the most popular semi-raw confections is yokan—sweet red bean paste jelly. Yokan has an intriguing history. During the Nara and Heian periods, the term yokan referred to lamb stew (yo meaning “lamb” and kan meaning “soup” or “stew”), a savory banquet delicacy for the upper classes. There was also a type of sweet rice cake from China called yokan mocha, shaped and colored red like lamb liver, that was apparently developed so Buddhist priests, who were ostensibly vegetarians, could vicariously sample the lamb dish. One of the few sweets made using sugar during this time, yokan mocha was considered quite exotic. Teikin orai, a book written anonymously in the early Muromachi period, tells of 48 differently shaped types of yokan, all steamed.

In the Kansei era (1789-1800), an unsteamed version called neri-yokan was developed that used agar-agar as the setting agent. Since then, many variations of yokan have appeared, using chestnuts, sesame seeds, different types of beans in place of adzuki, and so on. Mizu-yokan, so delicate and soft it is eaten with a spoon, is the summer variation. 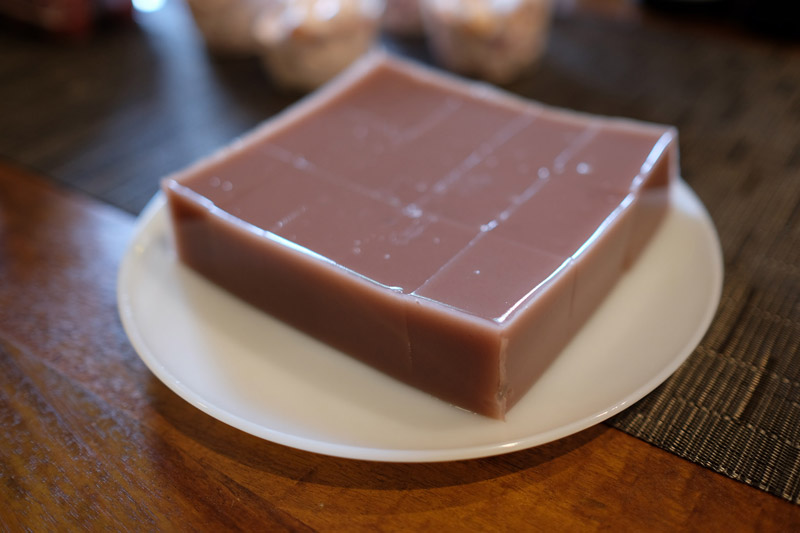 *Agar-agar is gelatin made from seaweed. Used in many Japanese sweets, it is available at Asian markets and health food stores.
Tried this recipe?Let us know how it was!