The first few days of the new year in Japan, known as O-shogatsu, are a gourmet’s delight. In particular, the New Year’s Day banquet, or Osechi, traditionally enjoyed in every home features many special foods. It is truly my favorite holiday and one I look forward to every year. And let’s be honest, it is not just the ritual of shopping, preparing, and cooking that is fun but of course, also the eating of it with my daughter!

One of the most popular dishes in the New Year period is a sweet potato puree with sweetened chestnuts called Kuri Kinton. Chestnuts are a celebrated product of many regions of Japan, but perhaps the most delicious ones come from Tamba in Hyogo Prefecture. There is also a magnificent sweet, made of slightly sweetened mashed chestnut formed into chestnut shapes, that is a specialty of Nakatsugawa in Gifu Prefecture.

According to Ryori monogatari (“The Story of Food”), a collection of recipes dating from 1643, the original kinton (which means “golden cushion”) was a dumpling served in miso soup. A sweetened version, thought to be an imitation of Chinese-style sweets, gained popularity around the end of the Meiji era (1868-1912). As with many of the foods served during the extended New Year holiday period, sugar was originally used as a preservative, so Kuri Kinton can be suffocatingly sweet – adjust the sugar content to your own taste. I prefer the less sweetened version.

The sweet was originally made only from candied chestnuts, but the prohibitive cost led to the addition of sweet potatoes. These days the chestnuts aren’t absolutely necessary, but they do add a nice flavor and slight crunch to an otherwise smooth texture. Sweetened chestnuts can be bought at gourmet stores or online, or you can make your own – but it’s an arduous task. Japanese sweet potatoes (satsumaimo) are like yams, but the skin is redder and, when boiled, the inside is yellower and a little sweeter than the American variety.

Kuri Kinton is traditionally eaten as one of the side dishes for the Osechi banquet, but if you have any leftovers, it is also yummy spread on toast like jam or eaten with hot green tea or matcha, the special powdered green tea used for tea ceremonies. 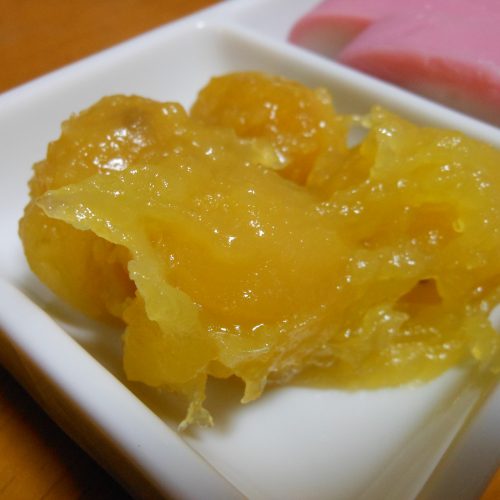 This makes a lot of Kuri Kinton! So, if you are expecting a smaller crowd, cut the recipe in half.
Tried this recipe?Let us know how it was!