Contrary to popular belief, potatoes have always been an integral part of Japanese cooking, especially in the form of potato croquettes (called korokke コロッケ). There are a variety to choose from such as jaga-imo (potato), satsuma imo (sweet potato), sato-imo (taro), and yama imo  (yams)—usually eaten raw.

When Did Potatoes Come to Japan?

Potato Croquettes (called Korokke コロッケ) in Japanese have been a beloved, popular and delicious dish enjoyed by both kids and adults since the Taisho Era (1912-1925) when many western foods (yoshoku) gained popularity in Japan.  How to make proper croquettes was even taught at girls’ high schools back then. Today, ready-made and frozen croquettes of infinite variety are available everywhere.  But, the traditional croquette in Japan remains that made only from potatoes.

The main secret to a successful croquette is tasty potatoes, a light hand when frying, and to serve it piping hot. Croquettes can become tasteless and soggy very quickly. Having said all of that!, croquettes are also a bento favorite (ie served cold), and as well as popular street food.

Why not get the kids involved to help make them and make a party out of it? You can make extra, and wrap each individually and freeze. You don’t even have to defrost them to fry them either.

Croquettes typically use panko (Japanese bread crumbs) which gives a very nice crispy coating. I love panko, and use it all the time, even in non-Japanese recipes.

Don’t forget to check out the notes section of the recipe for more variations!

In the notes section of the recipe, I have included some popular variations for you to try as well. 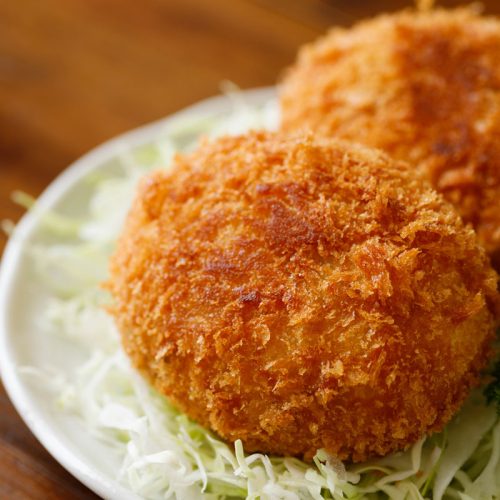 Some popular variations include: *You can also make fresh breadcrumbs if desired instead of using panko.
Keyword potatoes
Tried this recipe?Let us know how it was!

Leave a note in the comments section and let me know if you made this recipe or a variation and how it turned out!