Kanazawa boasts a special regional cuisine called Kaga no aji. In general the taste is mildly sweet, like most Japanese country cooking. Visually, it is not as sophisticated or ornate as Kyoto’s kaiseki haute cuisine, since it’s based on the food of the samurai – substantial and hearty, with taste, not looks, being paramount.

Jibuni is one tasty example, a special regional recipe of duck (or chicken) and vegetable stew eaten not only as a seasonal daily dish in Kanazawa but also served on many special occasions. We don’t know the precise origins of jibu, but ni means “to simmer.” Some people say that jibu jibu is the sound the stew makes while cooking. Others believe that the stew was invented by a samurai named Jibu. Since it is one of the few dishes that uses flour as a thickener, many suspect that it has Portuguese origins from the early days of the Edo period (1603-1867).

Jibuni is one of my favorite Japanese winter comfort dishes, but please don’t limit yourself to consuming it only during that time of year. Based on the season, there are many variations around. It’s fun to play with the basic recipe, replacing ingredients according to your tastes or what’s available at the market. For example, you can try fresh spinach; dried, reconstituted shiitake mushrooms or other Japanese mushrooms; Japanese parsley (seri); or Japanese leeks (negi).

My variation of jibuni is based on a recipe from Tsubajin, one of Kanazawa’s oldest (two hundred seventy years plus) and most famous restaurants.

The ancient castle town of Kanazawa, located on the Japan Sea side of Honshu in Ishikawa Prefecture, was ruled peacefully for over three centuries by one of the country’s richest daimyo families, the Maedas. It retains a rich cultural heritage and old-world charm, and also remains one of the true gourmet meccas of Japan.

Other Delicacies from Kanazawa

Many of Kanazawa’s delicacies, such as gori (singing bird fish), come from the Saigawa and the Asanogawa – two large rivers running through the center of town.

The Omicho Market, which is at least two hundred and fifty years old and is often referred to as “Kanazawa’s Kitchen”, continues to be one of the most notable food markets in Japan. The market is filled with more than two hundred open stalls selling a variety of fresh seafood and local produce, including game and a small, sweet coldwater shrimp called ama-ebi.

And since Kanazawa produces nearly all of Japan’s gold leaf, it shouldn’t be surprising that a local custom involves drinking green tea, coffee, or sake with edible gold leaf floating on the surface. It remains one of my favorite towns to revisit over and over. 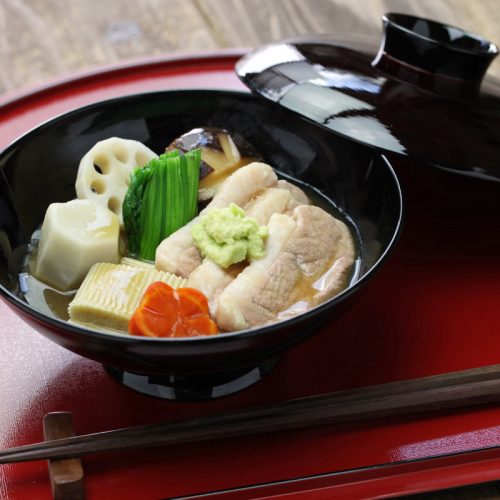 Notes: If you’re using tofu, first press some of the water out by putting it between two plates for 10 minutes. Drain. You may replaced the duck with boneless, skinless chicken breast.
Tried this recipe?Let us know how it was!