A long and mysterious history lies behind hoto, an udon noodle-based stew from Yamanashi Prefecture, near Tokyo. It appears to be mentioned in the Pillow Book, a collection of essays of the Heian era (794-1185), but its precise origins are unknown. Many intriguing stories have grown up around it, however, all likely containing an element of truth.

Some say that “hoto” comes from an old Chinese cake called hakutaku. It’s believed that the dish described in the Pillow Book was actually this dumpling-like cake, made of wheat flour, and for some time many dishes made from wheat were called hoto.

Other theories grow out of the constraints imposed on farmers during the Edo era (1603-1867). Although they belonged to the second-highest social caste, farmers were forbidden to eat rice, wheat, or soba (buckwheat noodles), all of which were taken as tax, to be eaten by the aristocratic class. It’s hard to believe nowadays, when Japanese farmers wield so much political influence and power, but the samurai government bled them dry. “Don’t let the farmers live or die,” ran a common motto.

Thus, according to one story, all over Japan farmers hid wheat from the eyes of government officials and disguised wheat dishes by calling them hatto or hattoh – meaning “prohibition” – instead of hoto. Such dishes were usually dumpling or wide soba soups.

Alternatively, the ban on wheat is said to have been effective, so that hoto didn’t become generally popular until the Taisho era (1912-1926), well after the lifting of restrictions. From then until the 1950s, Yamanashi folk habitually ate a type of hoto for their evening meal, and scooped hardened hoto onto rice for breakfast the next day.

An essential element of Yamanashi hoto is pumpkin (I love kabocha and use that), used as a sweetener in the old days when there was no sugar. It was gourmet food in mountainous Yamanashi.

Real hoto uses handmade udon noodles, which are made without salt and not left to rest, resulting in a chewy texture. Store-bought fresh udon noodles will do, however. Just don’t overcook them, aim for al dente. My umami-packed version contains pork, but chicken or wild boar can be added and even tofu, as well as assorted mushrooms, daikon radish, carrots, burdock root, taro, and aburaage (fried tofu pockets) just to give you a few other ingredient ideas. Modern recipes may even include curry or butter as flavoring. I like the extra richness of butter for this dish, but a neutral oil will do. With the weather starting to cool down in the Bay area, this is one of my favorite fall treats. It is hearty, filling, easy to make, versatile and above all delicious! I call it my Japanese comfort food for the fall. And making and serving a one-pot dish can’t be beat! 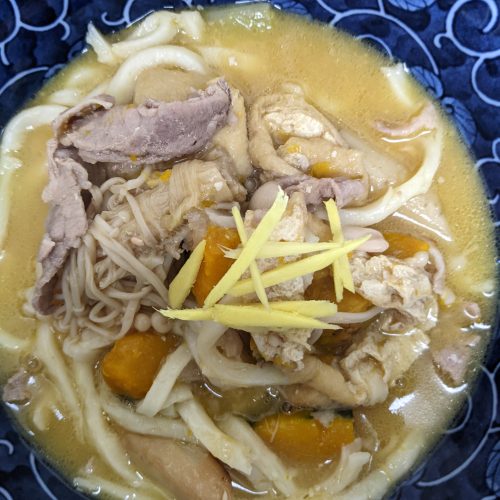 You can really add in a wide variety of complimentary vegetables that you may have around in your kitchen. What would complement your hoto? Onions, potatoes are just a few, etc. Some other options to try: Aburaage (fried tofu pockets):  Pour boiling water over first to get rid of excess oil. Slice thickly into fours. Your favorite mushrooms: I used shimeji, shiitake and enoki, but any mushroom will work. Satoimo (Taro): Peel, rinse, cut into halves or quarters and add with the other ingredients when sauteeing. Burdock Root (Gobo): My friend, Naomi, suggested it. Peel the gobo, and slice on the bias into thin slices. I sauteed the gobo in a little oil in the deep pot until it browned and released its sweetness. Then I continued with the rest of the recipe as noted above. Delicious!
Keyword noodles
Tried this recipe?Let us know how it was!