Japan may have been cut off from the rest of civilization during the Edo period (1603-1867), they sure didn’t suffer when it came to food and  had a surprisingly rich food culture. They had a vast and plentiful diet, that included many western imports. Over 300 cookbooks were written during the Edo Era. The following recipes, which are adaptations from Kyoikusha-shinsho’s fabulous Ryori no koten series, employ and highlight two fairly unusual ingredients for Japanese dishes of that era: black pepper and garlic.

There is an interesting story behind the black pepper. In 1609, a government official at the port of Hirado, southwest Japan, bought a large quantity of pepper from the Dutch. The Dutch were the only Westerners allowed to remain in the country after the Tokugawa government sealed Japan off from outside influence. Although pepper was a luxury item in those days, perhaps the official entertained the idea of promoting good ties or having a better import-export relationship with Holland. At any rate, this purchase might have been what led to the increasing availability and popularity of pepper during the Edo period.

These recipes originally caught my eye because I love all types of pepper and garlic!

I had some left-over black pepper rice, and fried it in a little oil the next day so that it was browned and crispy. Delicious! Whether you are on team rice cooker (my daughter), or team stove-top (me), this rice dish will come out perfectly either way. 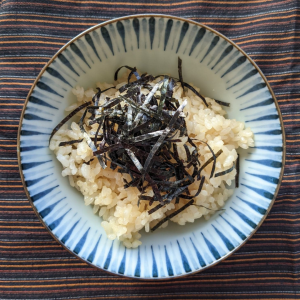 Soak rice in water for up to 30 minutes before cooking. Rinse and drain. Mix the rice, black pepper, soy sauce, and sake in an electric rice cooker or large saucepan. Place the konbu on top and add enough water to cook the rice. Follow instructions if using an electric rice cooker, otherwise cook covered for 20 minutes or until the water is absorbed. Turn heat off. Let cooked rice rest for 10 minutes with cover on. Discard konbu. Serve in rice bowls, top generously with shredded nori, and eat immediately. 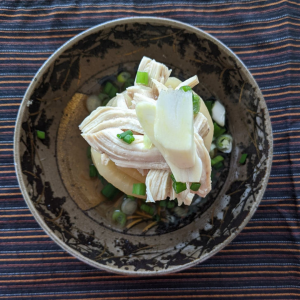 Place the cut daikon in a soup pot and lay the chicken on top. Cover with water. Bring to the boil, remove scum if necessary and cook, covered, for 10 minutes. Turn off the heat, take out the chicken, and discard the skin. Cool chicken briefly and shred it.

Add soy sauce to the soup pot and cook for a further 10-15 minutes with the lid off, or until softened. Take out the daikon and place in 4 or 6 serving bowls. To finish the sauce, turn heat down to low and add in the sake and salt. Combine the cornstarch with a little cold water to make a smooth paste and add to sauce to thicken it slightly, stirring until combined. Taste for seasoning and adjust if necessary.

Place the shredded chicken into the prepared sauce for a few minutes to reheat and then remove. Place the chicken on top of the daikon, pour a little sauce over it, and sprinkle with the garlic and green onions. Serve immediately.