Following a ketogenic diet is a great way to lose weight, but can you eat Japanese food on keto? The answer may surprise you, but YES! Eating keto, otherwise known as a low-carb-high-fat diet, is beneficial for a number of reasons, but a big part of it is eating in such a way that allows you to still enjoy many of your favorite foods. 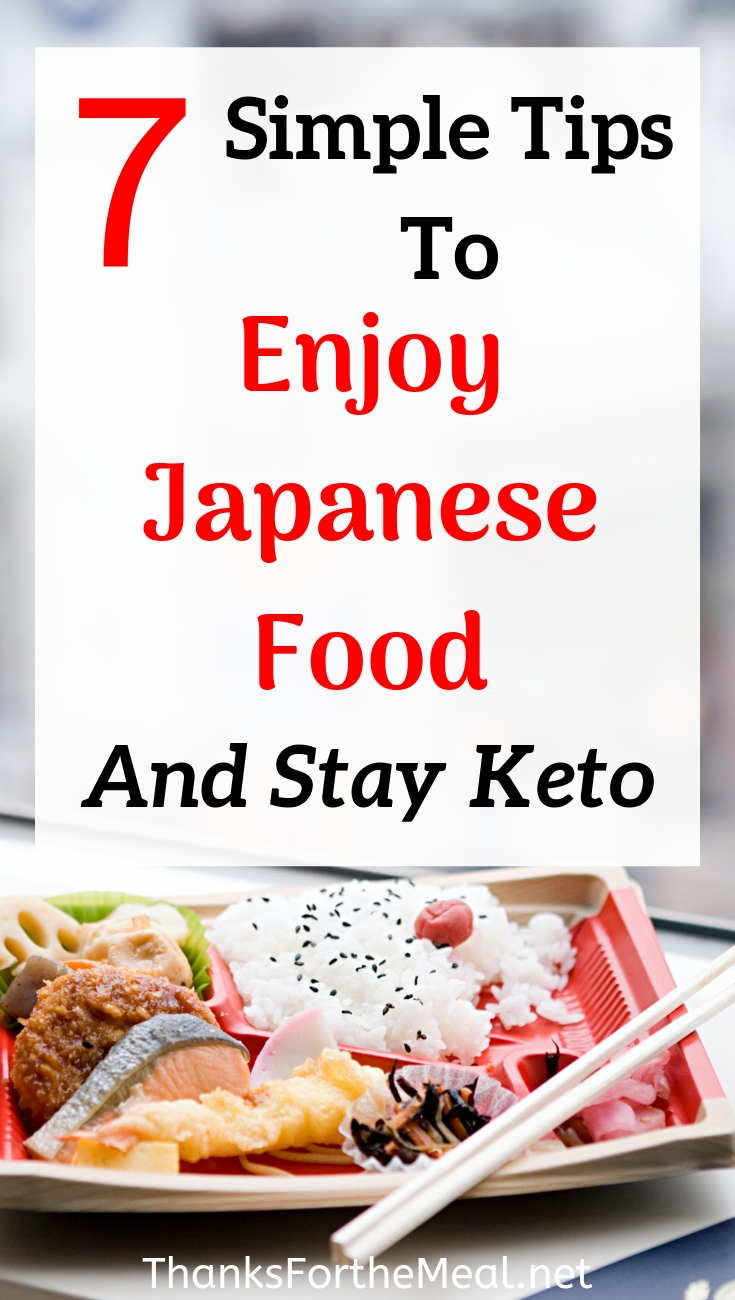 Anyone who loves sushi knows that you’re only ever one artfully made tuna roll away from a better mood, and the same can be said for good Japanese food in general. While you might think that a sushi restaurant isn’t the most ideal place to eat when you’re counting carbs…prepare to be pleasantly surprised. Japanese cuisine, while it has a few carby pitfalls, is full of dishes that focus on simply prepared fish and vegetables designed to let the food speak for itself.

If you’re not already familiar with Japanese food culture, then you will almost certainly have some questions about the various fruits, vegetables, sauces, and preparations that you will be experiencing and that’s fine. The goal here is to familiarize yourself somewhat so you can make better informed food choices that are not only delicious, but also allow you to sample some of the best techniques that Japanese cooking offers. Of course all of this was written keeping in mind that you want to maintain ketosis while eating delicious food and not stressing about the type of restaurant that you’re at; Japanese food is more than just sushi, after all!

New Year’s is one of the best times in Japan, at least for eating and relaxing. Get Lucy’s Osechi cookbook, full of recipes that are fast to make, easy, and quite delicious for your New Year celebrations (along with the history and traditions and little tidbits Lucy always includes). Get the book!

Makes a great gift too! Did you know on the Amazon page there’s an option to give it as a gift?

While tenpura is a mainstay in Japanese restaurants in the US, there’s are plenty of non-fried starters you can enjoy instead.

Miso soup is a thin, broth-based soup made with fermented soybean paste. It has a very unique flavor, with a high degree of umami while still being light and refreshing. Often it’s simply populated with cubes of tofu and some vegetables like cabbage. This is a delicious and often cheap start to a meal that’s keto-friendly. It’s worth noting too that if you’re avoiding soy but don’t have a good reason to (like allergies) other than word-of-mouth that it’s somehow bad for you, then stop avoiding it. Soy is healthy and a good source of protein, and it’s reasonably low in carbs.

Oshinko vegetables are essentially pickles and often includes daikon, lotus root, seaweed, and burdock. Daikon is a type of radish, burdock is similar to artichoke, lotus root is its own thing altogether, but delicious and still low carb friendly.

Edamame isn’t super low carb, but again most people avoid it because of some odd aversion to soy. In small amounts, edamame fresh from the lightly salted pod is a delicious way to whet your appetite.

Grilled vegetables are another way to enjoy an appetizer in a new way without overloading on sugar or carbs.

While you can’t enjoy the many splendors of sushi in all its forms, you can still enjoy the flavors and freshness by eating sashimi. Sashimi is essentially the same cuts of fish your sushi chef has available for rolls or maki, served with the same familiar additions as sushi – pickled ginger, wasabi, soy sauce – just without the rice. The best part of sashimi is the fact that because you don’t have the nori or rice to cover up imperfections, you will likely get the best cuts they have available.

Depending on where you are, most Japanese restaurants specialize in both sushi and hibachi. Hibachi grills are incredible both for the delicious food cooked right in front of you, but also because of the beautiful knifework and performance art that goes into the cooking. Dazzling displays of cutting, flipping, and searing are the visual appetizers to a main course of grilled meat or fish and Japanese vegetables. Just ask for your chef to hold the rice and you can stay keto friendly very easily at a hibachi.

Even if you don’t have a hibachi at your restaurant of choice, you can still likely get whatever meat they have offered in other dishes grilled simply to your liking and it never hurts to ask.

Shabu-Shabu is an interesting course that consists of very thin slices of beef and vegetables that are served with a very hot bowl of broth that you actually cook yourself at the table. Because of how hot the broth is and how thinly the food is cut, it takes just a minute or less to cook perfectly. I’ve got to be honest – it’s also really fun!

Negamaki is a delicious alternative to other sugary dishes, being that it’s simply grilled beef wrapped around green onions or sometimes asparagus, served with soy sauce. While I’ve had it both as an appetizer and as a meal, I think you could get it as either.

Of course like any restaurant there will be a number of things that won’t work well with your keto lifestyle, the most obvious of these being rice and noodles. There are some other things to avoid though, and it might require you to speak with your server or chef to determine what might be lurking in the dishes you have your eye on.

Tenpura, though lightly fried and crispy, it still a flour batter and so should be avoided. Even a small piece of tenpura vegetable can have upwards of 8g of carbs and that’s just not doable on a keto diet.

Most sauces that go beyond simply soy sauce – like teriyaki for instance – are going to be sugar or corn- syrup based and absolutely not compliant with a keto meal.

As sad as it makes me, seaweed salad is often quite sugary, despite being delicious. You can typically get a small green salad with Japanese dressing on the side so any added sugar is negligible, or again just opt for grilled or pickled vegetables to be safe.

Potstickers, called gyoza, are delicious but of course are made with a type of flour that is filled with carbs. Best to avoid them.

I remember avoiding going out to eat with my friends when I first started keto if they were going to a place where I simply couldn’t imagine eating low carb. Outside of a pizzeria or pasta house, however, you can adapt almost any cuisine to a low carb lifestyle, Japanese included.

Tony is a HealthyWage winner father of two who enjoys finding ways to turn his favorite carby foods into keto recipes (like his infamous air fryer steak bites and keto chicken tenders!) Be sure to check him out on Pinterest!