The History of Rice in Japan

Wet-rice culture came to Japan during the dawn of the Yayoi period (300 B.C. – 300 A.D.), either directly from China or via the Korean Peninsula. It was a time characterized by people known as the Yayoi, new tools and farming techniques (such as growing rice in paddies), and a deep reverence for rice itself, typified by seasonal ceremonies and festivities that are observed to the present day.

Until then, grains like millet or barley were the dietary mainstays of most Japanese. Rice farmers didn’t get to enjoy the fruits of their labor very often, either. During the Edo Period (1603-1867), rice was primarily used to pay taxes to samurai landholders; a samurai’s wealth, in fact, was measured by the number of koku (a koku equaled to little over five bushels) of rice he collected. The only people who ate white rice in those days were samurai, the upper classes, and rich merchants, and they were prodigious consumers of the stuff. In 1859, for instance, members of the upper social strata ate an annual average of 228 kilograms of rice. In comparison, in 2017,  the average rice consumption rate was around 82.1 kilograms per person.

Another reflection of the continuing importance of rice in Japanese culture is that the word gohan means not only “cooked rice” but “meal” as well. When somebody says “Gohan desu!” it can be translated as “Soup’s on!” During a typical day in a Japanese household, rice is served in many guises-plain rice accompanying a steaming bowl of miso soup and pickles for breakfast; a box lunch filled mainly with rice and topped with a fat umeboshi (pickled plum); onigiri (rice balls) for a snack; and for dinner, often rice, served in any number of variations.

Zosui (rice porridge) also known as ojiya is one such excellent way to utilize left-over rice and make it into a meal.  Although my recipe uses chicken and vegetables, you could also do a simplified version just using flavored dashi stock of some sort, eggs, and minced green onions or trefoil as a garnish. It is also particularly tasty using left-over reserved soup stock from a nabemono (hot pot) meal such as Oden. 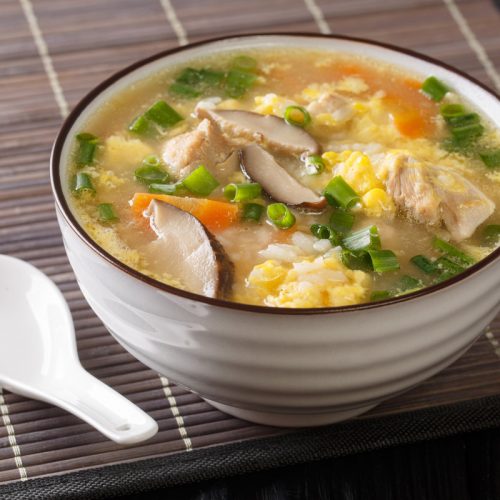 Do you love Zosui?

Snap a pic and hashtag it #thanksforthemeal — I would love to see a photo of your Zosui on Instagram and or Facebook, or leave a note in the comments section (see below) and let me know!