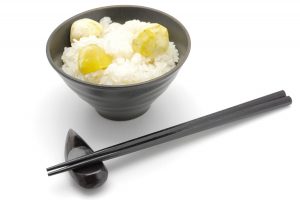 Making rice the proper way is an art in Japan, one that often takes many years to perfect. The importance of this is reflected by the overwhelming number of Japanese meals that end with a bowl of pearlescent, impeccably cooked short-grain white rice, pickles, and miso soup. Rice’s versatility doesn’t stop there, of course. One common variation is the vinegared rice used for sushi; another is the glutinous rice used to make sekihan (red rice) for celebrations.

Then there is the whole spectrum of mixed rice dishes. In Japan, the idea of mixing or cooking rice with other ingredients dates from the Heian era (794-1185). Rice in those days was so scarce and expensive that even for aristocrats combining rice with other foods was commonplace. Until the 1950s, people continued to prepare these kinds of dishes to supplement their rice – still a costly commodity – and to use up leftovers. Now it has become practically a fad to mix rice with such diverse ingredients as bamboo shoots, beans, chestnuts, and so on.

There are two main categories of mixed rice dishes: takikomi-gohan, which is rice cooked with something else; and maze-gohan, which is rice mixed with something else. The differences between the two involve how and when the other ingredients are added to the rice. To make takikomi-gohan, for instance, uncooked or precooked ingredients are either combined with the raw rice or added during the cooking process. Maze-gohan dishes involve blending in precooked and often flavored ingredients with cooked rice during the interval just before serving. The flavoring for both these forms of mixed rice is either salt or soy sauce-based.

Mixed rice dishes are known by many different names according to their region of origin and their ingredients. Further complicating the situation is the frequent substitution of the word “meshi” for “gohan” to mean rice. Some are popular nationwide and in all seasons. There are also special mixes with a seasonal connection, including bamboo-shoot rice (takenoko-gohan) in the spring and broad-bean rice (soramame-gohan) in the summer.

Kurigohan (chestnut rice) is another of these seasonal treats, a beloved favorite during the autumn months, and one of my favorites. There are two rice dishes, in fact, that typify autumn in Japan. One is made using matsutake mushrooms, often called “the truffles of the East”, real specimens of which are almost prohibitively expensive and virtually impossible to obtain outside of Japan. The other, of course, is chestnut rice, which uses inexpensive ingredients and can be enjoyed and savored almost everywhere. 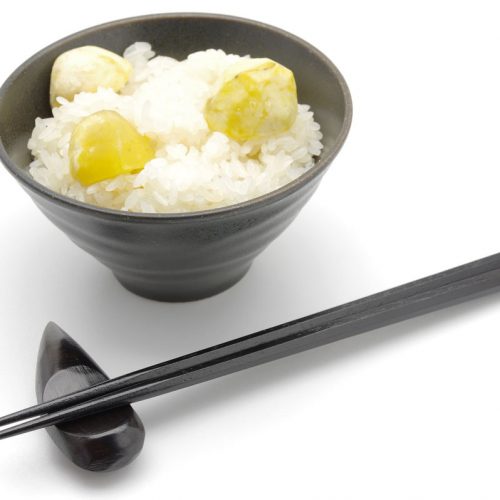 *Soak the chestnuts overnight in cold water (or soak in boiling water for 5 to 10 minutes) to make them easier to peel. Cut off the rounded end with a sharp paring knife, then remove the hard outer shell and the thin inner skin. Wash the peeled chestnuts lightly in cold water to get rid of their starch. To prevent discoloration, keep the chestnuts in a bowl of cold water until it is time to add them to the rice, then drain them and proceed with the recipe.
Tried this recipe?Let us know how it was!

Leave a note in the comments section if you make this dish!