A little unknown fact about me is that I love sumo! It is one of the few sports I’ll watch. When I lived in Japan, you couldn’t tear me away from the television whenever sumo was on. I even went to a live Sumo tournament in Tokyo with my then father-in-law and it was sublime! We dined on elegant and yummy bento boxes, drank a lot of beer! and watched sumo for hours. I’ve never had so much fun at a sports event in my life. To this day whenever I think of Sumo wrestlers I still giggle over their appearance and antics, but don’t be deceived, they are true athletes.

YOU’VE PROBABLY SEEN SUMO WRESTLERS in action – remarkably fat, semi-naked, they spend a lot of time hitting themselves on the posterior and prancing around doing what appears to be a rain dance in a dirt ring, trying to knock each other down. At first it looks pretty ludicrous, but after a while you begin to find them rather endearing.

The secret of sumo wrestlers’ rotund figures lies in enormous helpings of chanko nabe, a one-pot dish that is their staple fare. It can, in fact, be just about any form of nabe (one-pot) cooking, but traditionally it is chicken-based.

One story has it that during the Edo era (1603-1867) a group of wrestlers visiting Nagasaki learned to cook meals in a Chinese wok, or chanko – and brought the habit back to Edo (now Tokyo). Another theory holds that Hidekatsu Watanabe, a former wrestler who owned a restaurant in Tokyo, named the stew in honor of sumo stable masters, or “fathers” (chan), and their “sons” (ko), the wrestlers. But the most likely origin of the dish, although not the name, is that it was invented in the Meiji period (1868-1912) by former yokozuna (grand champion) Hitachiyama. On retiring he opened his own stable where, to save time, he introduced a simple one-dish meal.

The reason behind the preference for chicken is that chickens have two legs, like sumo wrestlers standing in a dohyo (sumo ring). For a wrestler to be on all fours means losing a bout, so it is considered unlucky to eat anything with four legs.

Chanko nabe stock can be flavored with salt, soy sauce, kelp, dried bonito shavings, or a combination of these. Each stable has its own special flavor: some add mirin (sweet sake), others butter. Since the stock is so flavored – good enough to enjoy on its own as a soup – a dipping sauce isn’t necessary. Many sumo wrestlers are diabetic, so chefs are careful about sugar, but otherwise almost anything can be added. The current fad is to add spicy Korean kimchi (pickled cabbage). 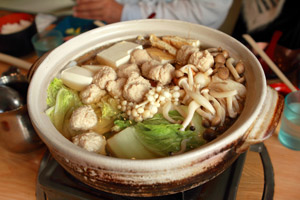 Chanko Nabe: A One-Pot Dish for a Pot Belly