Steak Fit for a Maestro

In 1927, the second year of  Emperor Showa’s Reign (1926-1989), Fyodor Ivanovich Chaliapin, the renowned Russian operatic basso, visited Tokyo. He was a true VIP, often earning as much as ¥30,000 for one performance, at a time when you could build a house for ¥1,000. In Tokyo, he stayed at the Imperial Hotel, near the Imperial Palace.

The chefs at the Imperial Hotel were very nervous about Chaliapin’s visit, since he was known to have very pronounced culinary tastes. The only fish he ate were salmon and herring, and when it came to meat he would touch only beef and chicken. He had a particular love of beef and ate it almost every day.

One day during his visit, Chaliapin developed tooth trouble and had to visit a local dentist. He came back to the hotel minus a number of teeth – but still hungry. Chef Fukuo Tsutsui of the hotel’s Grill Room wracked his brains to figure out a steak dish that Chaliapin could eat and enjoy. A secretive character, he waited until all the other chefs were on their lunch break and then sneaked into the kitchen, where he pounded a steak to tenderize it, soaked it in onion juice for thirty minutes, sautéed it, and topped it with cooked onions. Chaliapin was in heaven! The president of the hotel, Mr. Inumaru, promptly dubbed it, with Chaliapin’s blessing, Chaliapin Steak – still served today at the Imperial Hotel.

We might never have found out the secret of Chaliapin Steak if it hadn’t been for the disruptions of World War II. In those days, it was common to give some sort of farewell present to a soldier setting off to battle. Chef Tsutsui gave as his farewell present to a departing junior chef, Nobuo Murakami, the secret of tenderizing steak with onion juice. His parting words to Murakami were: “You will die, so I will tell you.” Happily for us – you’ll never taste a more tenderer and delicious steak for so little effort – Thankfully, Nobuo Murakami came home safely, was known for his innovative culinary contributions to the 1964 Tokyo Olympics, and later became chief chef of the Imperial Hotel in 1969. 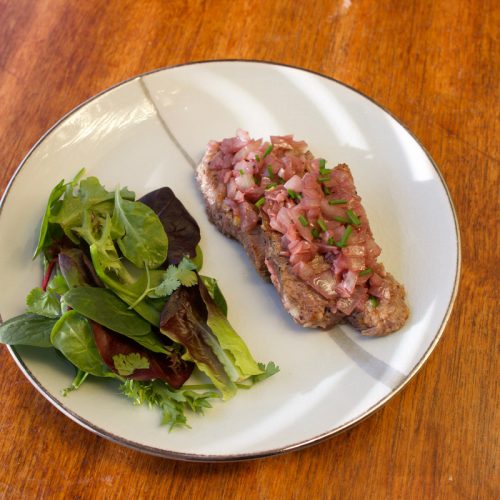 Do you love Chaliapin Steak?

Snap a pic and hashtag it #thanksforthemeal — I would love to see a photo of your Chaliapin Steak on Instagram and or Facebook, or leave a note in the comments section (see below) and let me know!