In fact, this type of food began to be popular even while Japan was still officially closed to the West. A number of restaurants specializing in Western dishes can be traced back to the final days of the Edo period (1603-1867), among them Ryorin-ten in Nagasaki which opened in 1863.

Up to the mid-twentieth century, yoshoku was defined by such dishes as omelettes, breaded beef cutlets, crab croquettes, hayashi (hashed beef) rice, and a few classier dishes such as tongue stew.

Today this type of food is still popular, with a number of famous restaurants in Tokyo continuing to serve a distinctive version of Western, often heavily French-influenced cuisine. More recent additions to the repertoire include tonkatsu (pork cutlet) and potato croquettes. Yoshoku is now so firmly planted in modern Japanese culture that it will most likely evoke sighs of nostalgia when served to someone from Japan.

This recipe appeared originally in my original newsletter entitled "Gochiso-sama," which of course means Thanks for the Meal. A reader of that newsletter who I met years later, informed me that it was this very recipe that clinched his proposal to his now-wife. I love the power of food!

The Importance of Demi-glace Sauce in Yoshoku Cooking

Demi-glace sauce is essential to the preparation of yoshoku dishes. This classic sauce is based on Espagnole sauce mixed with meat stock, then reduced by cooking for a long time to one-half its original volume. It can days to make. Excellent pre-made versions are available. Madeira (a fortified wine from Portugal) is often added and this recipe specifically calls for a dry Madeira.

Espagnole sauce, if you're not familiar with it, is a basic brown sauce, based on Auguste Escoffier. 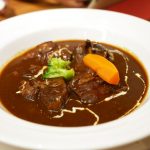 This stew can be made a day in advance and slowly reheated. Season to taste once again and serve.

Snap a pic and hashtag it #thanksforthemeal — I would love to see a photo of your beef tongue stew dish on Instagram and or Facebook, or leave a note in the comments section (see below) and let me know!