In Juzo Itami’s definitive movie on ramen, “Tampopo,” a woman fights for her economic survival by learning the art of ramen (Chinese noodles in soup) making. Kitakata, Fukushima Prefecture, the local economy survives due to the largest concentration of ramen shops in Japan. Why? Ramen is a successful Chinese import, made from wheat flour, eggs, salt, and kansui, a special mineral water from China. Ramen may have the reputation of being a low-class noodle dish, but ask any Japanese what food they want to eat as a late-night snack. The answer will inevitably be ramen; preferably at a late-night ramen stall or shop.

Below you’ll find all 5 recipes in the “Art of Ramen” series.

A messenger from China brought the flour food culture to Japan in the 8th century. That is when the first form of noodles were first seen in Japan. BY the Edo period (1603-1867), there was a noodle boom in Japan. During the period of 1854-1859, there were 3,700 noodle shops in Edo (old Tokyo). In contrast, the population was only a million. The first person to eat a form of ramen in Japan was Mitsukimi Mito (1628-1700), a relative in Shogun during the Edo era.

So Many Types of Ramen…

In the movie, “Tampopo,” the heroine is in search if authentic ramen, not realizing that ramen is one of Japan’s most versatile noodle dishes. These days, anything goes. It is true that there are standard tastes one expects at a ramen shop or stall, or when eating an instant ramen mix. That is only the beginning in terms of a multitude of tastes and variations.

Ramen has three main tastes: soy sauce, salt or miso (fermented soybeans). Ramen has made regional modifications. For example, Sapporo Ramen, one of the most famous, always uses butter as a garnish. It began in 1923, in Hokkaido, at a noodle shop called Takeya Shokudo.

Ramen noodle making is also varied. It can be made in one of three ways. The most traditional method coming from China, employing a special technique is the extending of the dough by hand. Another way (teuchi) is handmade noodles rolled out with a rolling pin and cut with a knife. The most common and popular way is machine cut noodles. The big difference in these methods is the amount of water in the noodles. Handmade noodles tend to be more watery, with a smoother surface. Machine cut noodles are hard with an uneven surface. These noodles absorb more water, so after eating ramen noodles, most of the soup is gone.

Not sure where to get ingredients?

I like NIHON ICHIBAN (a shop for authentic Japanese products run by the same family for 5 generations). This is an affiliate link so without costing you anything extra, I’ll earn a small percentage of the sales if you purchase items through this link. Thank you for your support!

One of the most interesting phenomena in recent ramen history, as ramen has become a mainstream noodle dish, filtering through society, is the development of some very strange ramen variations and combinations. Here are only a few of the more outrageous.

In a coffee shop in Hakata, Fukuoka Prefecture, ramen noodles made from such diverse ingredients as spinach, carrots, perilla leaves (shiso no ha), oolong tea, or coffee are used. Colorful garnishes include lettuce, tomatoes, cherries, egg and naruto (pink and white spiralled fishcake). The Kanto-style soy-sauce based soup is used with the coffee noodles. The hot soup and coffee flavor create a very distinctive taste. The Kyushu influence is seen by the use of oil floating on top.

Tomato (called red eggplant in China) Yumen, reflects the enduring Chinese influence on ramen noodles. Half boiled tomatoes are crushed using chopsticks, then eaten with noodle in a pork-based soup that has special fragrance, due to the use of celery leaves. First developed by a chef at the Taiwanese Consulate in Tokyo.

For the home cook, with a little help from using prepared noodles, it is very easy to make your special style of ramen noodles. We include a variety of soups and garnishes to excite your palate. You take it from there.

** The evolution of ramen as a dish and its many different names throughout history reflect the changing Japanese image and attitudes toward China, and increasing popularity of Chinese food. By 1872, the year of the Friendship Treaty between China and Japan, there were over 1100 Chinese living in Yokohama’s Chinatown (called Nanking-machi.) Within ten years, this number would triple. Then, authentic Chinese restaurants were too expensive for most Japanese. After the Sino-Japanese War (1894-95), all that would change. More Chinese exchange students came to Japan, and smaller, one dish specialty restaurants (like noodle shops) begin in Nanking-machi. **The name changed from Nakingsoba to shinasoba (used in Nanking-machi from about 1912), then to chukasoba, and, finally, for the past eighty years, ramen.

**Shinasoba wasn’t cheap, but people tried it because it was new. As a comparison, 1.8 liters (a sho) of rice cost 10 sen. The first shinasoba shop was opened in Yokohama by a Chinese. There were no fancy garnishes, just noodles and a pork-based soup with a little soy sauce. Menma (mistakenly thought to be preserved or boiled Chinese bamboo shoots, but were instead Manchurian wild rice stems) were added around 1908, with barbecued pork to satisfy Japanese customers need for little culinary embellishments. It wasn’t until after the great Kanto Earthquake of 1923, that more ornate garnishes were added.

**Kansui (Chinese mineral water) is another essential element to making good ramen noodles. The Japanese have borrowed it from China for years. The se of kansui in Chinese flour products have been used for over a hundred years. A Chinese farmer found that if he used special mineral water, made from water of Kan Lake in Northern China, the noodles were easier to extend by hand, with a more elastic and smoother surface. The Chinese believed it had mystical or magic qualities. The Japanese thought so too, until 1959, when it was found to have similar chemical properties to baking soda. The distinctive yellow color of ramen noodles comes from kansui affecting the natural color of the flour.

**By 1911, the first Chinese noodle shop in Asakusa, Tokyo called Rairaiken opened and used kansui to make handmade, naturally extended ramen noodles. Rairaiken specialized in ramen, wonton and shumai. By 1912 or so, Rairaiken had become so popular, that the noodles were being cut by knifes, and ramen noodles had spread throughout Japan.

**Ramen etiquette is pretty loose; but everyone agrees upon one thing; the noisier the slurping, the more enjoyable the eating experience.

A Guide to Cooking Ramen Noodles

**Ramen noodles are always cooked in plenty of water, just like spaghetti. But, salt is not added to the water. If water overflows when boiling, add a cup of cold water to stop it.

**Cook until the al dente (still firm) stage. The hot soup will cook the noodles to the appropriate doneness.

**Drain, but don’t rinse the noodles. Divide the portions (cook only 1 to 2 portions at once) and place in deep soup bowls immediately.

**If you plan to cook lots of noodles, keep the water level up.

Place on them on the table; to be added to the ramen by each person as desired.

Here are 5 ramen recipes to get you started! 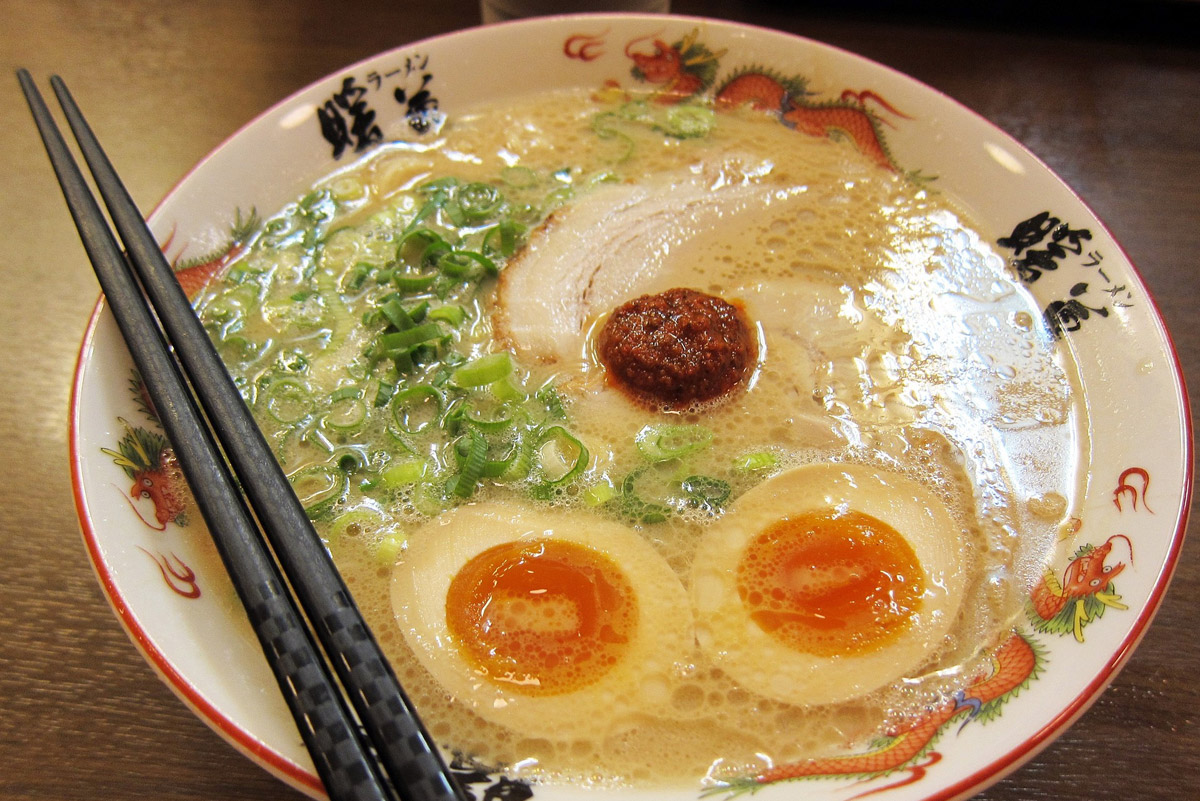 The Art of Ramen: Basic Chicken Stock For Ramen

*This recipe can be easily doubled or tripled to yield enough stock for 10 to 15 servings. The stock can be frozen for later use. One serving is 1-1/4 cups. **Cracked pork bones (for a richer stock) and even shelled short-necked clams, quickly sautéed in sesame oil (for a lighter stock) can replace or be mixed with the chicken to create a different tasting stock. ***The egg shells help to kill the smell of the carcass and/or bones, and to absorb some of the scum.
Tried this recipe?Let us know how it was! 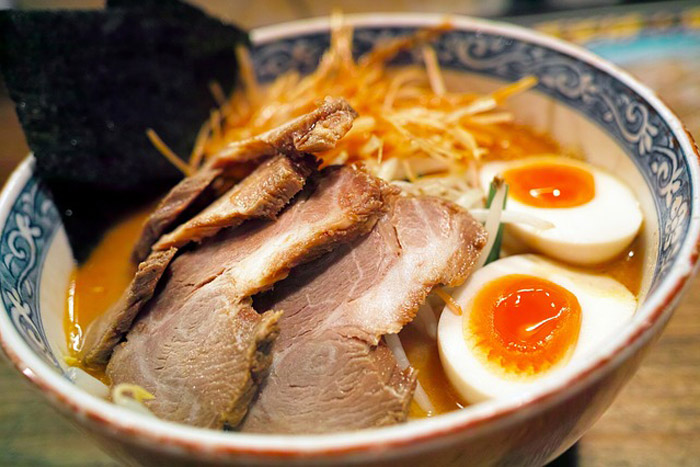 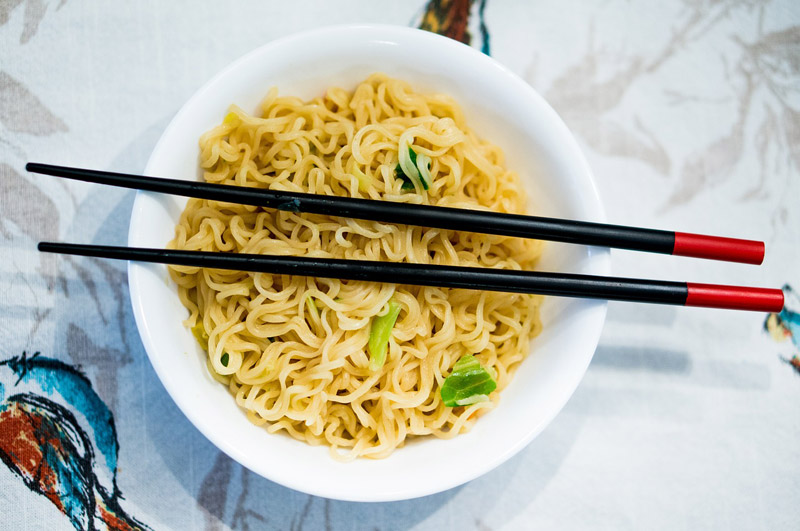 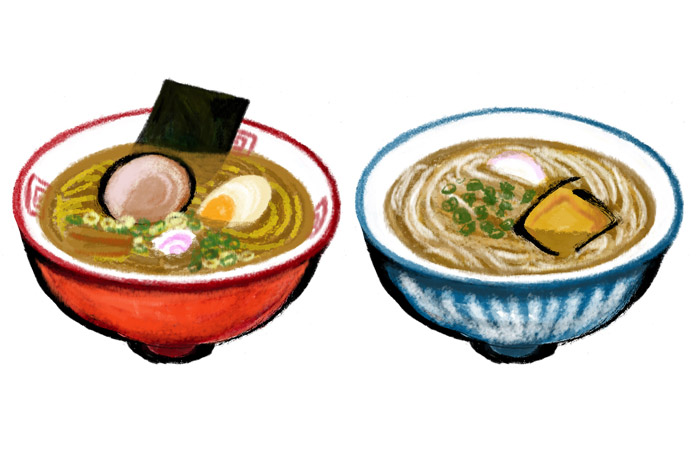 *Barbecued Pork is just one of the many garnishes used for Ramen. A serving usually consists of three to four slices. **Any left-over pork may be frozen and used another time.
Tried this recipe?Let us know how it was!

*Lard may be replaced by oil in all the recipes, but, the flavor will change.
Tried this recipe?Let us know how it was!

Leave a note in the comments section (see below) with your favorite Ramen dish!